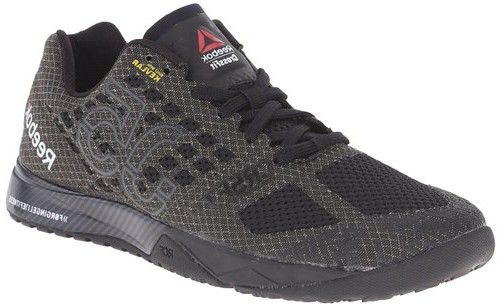 Using words like lightest, strongest and most innovative, Reebok presents the Crossfit Nano 5.0. Loaded with advancements in technology, female athletes should find these comfortable and durable during any WOD. The NanoShell is composed of polyurethane for improved support, especially during heavy lifts, and endurance in preventing midsole abrasions. DuPont Kevlar is infused into the Rebook Crossfit Nano 5.0 mesh upper, again increasing durability as well as improving airflow. To make the fit more defined, Reebok re-engineered the midsole shape and attached the tongue to the shoe. This also add support during weight lifting. The CMEVA cushioning, contoured heel counter and anatomical footbed continue enhancing the fit of the shoe. The Reebok Crossfit Nano 5.0 continues its technology with raised outsold lug patterns which provide a better grip of surface area, improving traction on most surfaces. Further, the shoe contains RopePro carbon rubber for Crossfit maneuvers on rope climbs or of any kind. With only a 3mm heel drop platform, women will feel stable during any WOD in this shoe.

Reviews on Amazon praise the stability of the Reebok Crossfit Nano 5.0 provided by the small drop and flatness of the shoe. Several reviews said the design saved them during lifts or WODs with lateral movements. Many stated the toe box is wide and roomy, which they liked. About an equal amount of reviews said the shoe fit true to size as said they needed a ½ size larger. If possible, try both to see which works best or try Amazon’s “find the right size” 3D measurement assistant at the link above. A few people stated the ankle height of the collar is higher than other shoes so they experienced some rubbing but most said they were used to it after a few workouts.

Several of the people who provided reviews on Amazon stated the material had no give, which is how Reebok designed the Crossfit shoes in order to provide the stability and security needed for crossfit workouts. Some said they just needed breaking in for a couple of workouts but some said they could not adjust to the lack of give from the material.

This stylish shoe comes in a variety of color blends and a few solids. It even comes in a red, white, and pewter Americana design with stars adorning the heel of the midsole. 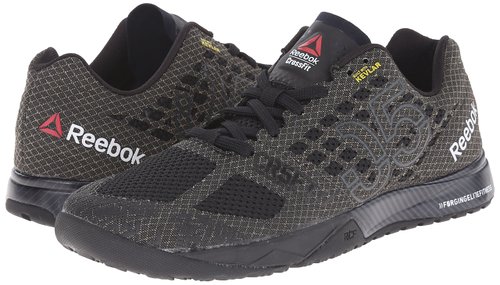 Described as a crossfit addict and a Nano girl, Megan Drapaiski describes her thoughts on the Reebok Crossfit Nano 5.0 in an article for The Rx Review. She said one of the best aspects of the Nano 5.0 is the light weight material that one wants in functional fitness workouts. She described the shoe as working great during rope climbs and being a solid shoe for lifting. She stated it provided good arch support but she dislikes the new, synthetic leather material of the tongue. Finally, she said in the past Nano’s have been true to size but that for the 5.0 she did need a ½ size larger. She concluded by saying there is little to complain about with this light weight, durable Crossfit shoe.